Ebay, the ecommerce giant beloved by bargain-hunters, today announced plans to broadcast live auctions of fine art and antiques in partnership with Sotheby’s, the elite auction house known for headline-worthy events like its $45 million sale of a Francis Bacon triptych.

The joint effort represents an attempt to woo the dollars that online shoppers are spending on luxury goods. According to eBay, more than 3,500 of its auctions close each day at a price point greater than $5,000. Sotheby’s, for its part, has seen a leap in buyers’ activity online over the last two years, with online bidders competing for nearly one in five lots in 2013. In April of this year, Sotheby’s sold John James Audubon’s elephant-folio The Birds of America for $3.5 million, a new record for the company.

For eBay, the partnership further signals the company’s shift away from online flea market to curated storefront of big-name brands. For Sotheby’s, which has been looking to grow beyond its core, high-end audience, eBay offers both a channel for reaching 36 million collectibles shoppers, as well as a platform for selling a higher volume of lots at the mid-tier luxury price point most lucrative to its business. (Works like the Bacon triptych build an auction house’s reputation, but the terms of the sale are typically more favorable to sellers than to the house.)

Competition in the category is heating up, with Christie’s hiring technical talent to build out its own online auction capabilities and galleries adding inventory to Artsy, a site that helps collectors discover and buy art that matches their tastes.

“We are joining with eBay to make our sales more accessible to the broadest possible audience around the world,” Bruno Vinciguerra, Sotheby’s chief operating officer, said in a statement.

Over a decade ago, in the frothy valuations of ecommerce’s early days, Sotheby’s announced a similar partnership with eBay. But the site fizzled and Sotheby’s closed down the project’s team of 200, according to theNew York Times.

This time around, executives say, the stars have finally aligned. Online sales comprised 5% of the $65 billion global art market in 2013, and are growing at a rate of 25% per year. 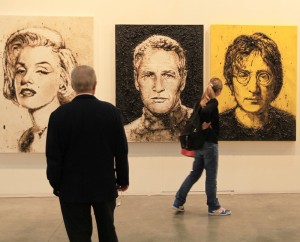